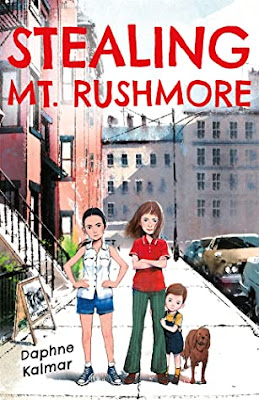 It’s the summer of 1974, and the Watergate scandal is all the news. But for Nell Sanders, 12, there are other worries. Five months ago, her mother had walked out, leaving Nell to care for her depressed father Ronnie, a short order cook, three brothers, and the house. Mom may be gone, but her father’s dream of taking his family to see Mt. Rushmore isn’t. It”s such an important monument to him that he named his three sons after the presidents carved there. Well, all except Abe Lincoln. That should have been Nell, instead she was named after Susan B. Anthony.

But when her father discovers that the money he worked so hard to save is gone for their trip, he’s sure their mother took it when she left. Depressed and angry, Ronnie takes to his bed. Left to fend for herself, the house and her brothers George, 15, Tom, 10 and Teddy, 6, Nell is determined to replace the missing money so that everything will once again be A-okay, as her dad would say.
And as if she hasn’t enough to do, Nell and Teddy rescue a dog that is being abused, even though their father has made it clear – no dogs allowed. Naturally, they name the dog Abe. As if George becoming surlier, Tom withdrawing more into the basement to build models, and Teddy becomes needier isn’t enough, Nell’s best friend has become boy-crazy, causing a rift between them. But not before Nell comes up with a brilliant way to make some replacement Mt. Rushmore money with Maya’s help.
To top all this off, Nell finds out that it was George who took the money in the first place and gave it to their mother for her new apartment in Boston. Then, when their dad finds this out, the rupture in the Sanders family just keeps widening, to the point where even Nell begins to lose hope.
The Sanders family is certainly dysfunctional, but not because mom left. She has always made it clear she did not want to be there, did not want kids, did not want to be married. But while she was often mean and insulting to her family, her presence is still missed.
Now, Nell is thrown into the role her mom should have fulfilled, because, as she says, “Mom had ducked out on cleaning and cooking and kid watching and I got stuck with it because I was the girl.” Yet, Nell is extraordinarily kind to Teddy, giving him the motherly care and attention she so desperately needs herself. The clearest example of that is when her body begins to change, and there is no mom there to help and support her.
Kalmar includes a number of important themes in Stealing Mt. Rushmore. It is interesting that she chose to tell Nell’s story against the backdrop of Watergate. Both involve disillusionment, Nell in her mother, the country in Nixon; relinquishment, mother and family relinquishing each other, Nixon relinquishing the presidency; and both of these things result in change for the family and the country.
But there are also themes of  neglect, a father who sleeps his depression away, and racism directed at Nell’s friend Maya, whose family was from the Azores and whom Nell’s neighbor refers to as “that foreign girl,” but neither of these themes were explored with any depth. I also found that some of the language and some of the topics had a more modern sensibility – for example, a hippie telling Nell about how Mt Rushmore was stolen from the Native Americans living there. On the other hand, I loved all the period details, and there were plenty giving the setting a real feeling of authenticity, making this a good choice for anyone interested in historical fiction.
This book is recommended for readers age 10+
This book was gratefully received from Barbara Fisch at Blue Slip Media