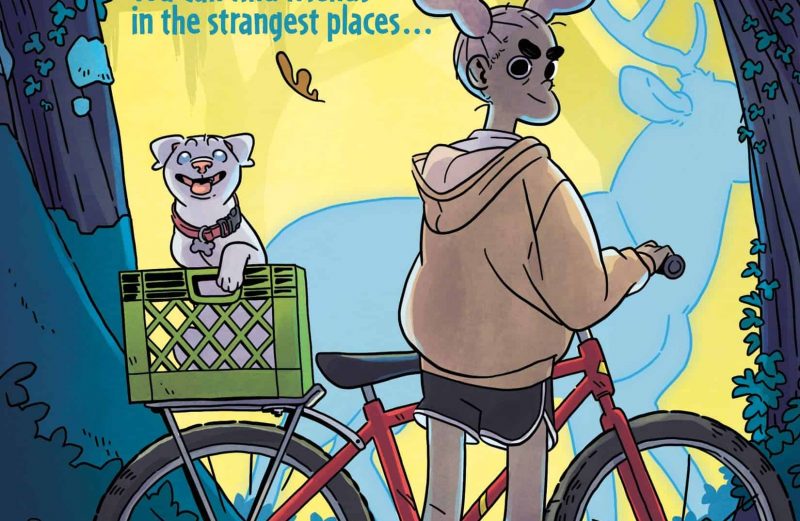 Summary:  Snapdragon believes a woman in her town is a witch, and when her dog goes missing, she’s afraid the witch has eaten him.  An angry confrontation winds up being the beginning of an unusual friendship.  The “witch”, Jacks, turns out to be a lonely old woman whose business is rescuing roadkill and rebuilding their skeletons to sell online.  Snap and Jacks bond over their love of animals, but as they get to know each other better, Snap discovers that Jacks has a deep connection to her own family from long ago.  Not only that, but the woman turns out to possess some of the magical powers Snap first suspected her of having, and Snap begins to learn some magic herself.  When Snap’s mom’s abusive ex-boyfriend shows up, it’s up to Snap and Jacks to use their magic to save the day.  Jacks finds herself back in the family again, and it looks like there just might be a happy ending for everyone.  Includes pages showing the process of early sketches and turning them into the finished pages as well as some other book cover ideas. 240 pages; grades 4-8.

Pros:  Kat Leyh packs a lot into this graphic novel, with an ambitious story and lots of interesting characters including the two main ones, as well as Snap’s mother and grandmother, and Lulu, her transgender best friend.  She masterfully cuts from one scene to the next, keeping the action moving quickly.

Cons:  The ending wrapped up pretty neatly, and I don’t see any sign of a sequel.