The Henna Wars by Adiba Jaigirdar

The Henna Wars by Adiba Jaigirdar 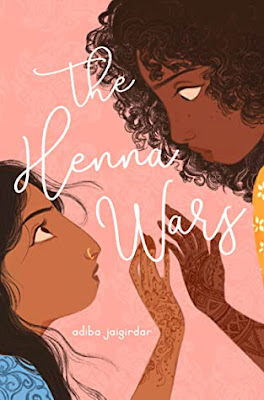 Nishat Ahsan is a 16-year-old Bangladeshi girl living with her family – her Ammu (mom) and Abbu (dad), and younger sister Priti – in Dublin, Ireland. Nishat has known for a long time that she is a lesbian, but now she’s tired of hiding it. To spare her parents the future disappointment that they will never have a big Bengali wedding for her, on the day of Sunny Apu’s engagement party, Nishat decides it is time to come out to her parents. It does not go well. As Sunny Apu later tells Nishat “Muslims aren’t gay.”

Nishat also has an interest in henna, a family tradition, and has been practicing on herself and Priti, and she getting pretty good at it. When Sunny Apu’s wedding rolls around, Nishat does the henna on herself and Priti. At the wedding, she meets and is attracted to Flavia, a biracial Brazilian Irish girl, who admires Nishat’s henna designs and later turns out to be a classmate. But Flavia is also Chyna Quinn’s cousin, and Chyna is Nishat’s former friend, now mortal enemy and a bully.
At school, Nishat, Flavia and Chyna are in the same Business class and when it is announced that the students will be required to develop a business, and to make it interesting, it will be a competition with a prize of 1,000 Euros. Nishat decides to set up a henna business with friends Jess and Chaewon, but when Flavia and Chyna show up at school with a henna design on their hands, she is more than a little upset. Flavia is a talented artist, and has copied Nishat wedding design perfectly. The two cousins decide their class project will also be a henna business.
To complicate matters for Nishat, Jess and Chaewon decide they feel left out of the henna business and decide to strike out on their own, her parents are barely acknowledging her, convinced that she has chosen to be a lesbian, and her crush on Flavia is in a constant state of flux. Sometimes it’s on, sometimes it’s off, sometimes Nishat thinks Flavia feels the same way, sometimes she thinks maybe not, but Chyna’s presence always overshadows things. Luckily for Nishat, Priti always has her back – or does she?
The Henna Wars is a very engaging novel, the kind of story that hooks you from page one. I found that when I had to stop to do other things, I couldn’t wait to get back to Nishat’s story. Since she and her family are Bangladeshi, the author has included lots of Bengali culture and tradition, including the art of henna. This always gives a novel so much character and depth, and a real sense of authenticity. For me, it was another one of those books that was a sliding glass door into Nishat’s world, to paraphrase Rudine Sims Bishop. And I was happy to be invited in.
But Jaigirdar has also explored a number of important themes. Her main theme is family and Nishat’s relationship with her parents and her sister. Up until she came out, the family seemed to be close knit and very loving. Her parents believe Nishat chose to be gay and can’t understand why she doesn’t just change her mind. Nishat and Priti are sisters and best friends. They share a bond that is enviable, with few secrets that aren’t shared. And while Nishat can be a little impulsive, Priti is often the voice of reason for her.
The other relationship in Nishat’s life is her friendship with Jess and Chaewon. Interestingly, they are friends in school, but never socialize away from school. And perhaps the most important relationship that is looked at is Nishat’s obsession with Flavia and what it does to her relationships with Priti, Jess and Chaewon. And of course, at the center of everything is Nishat’s Bangladeshi heritage, her Muslim religion, and always feeling different.
The Henna Wars is a debut novel for Adiba Jaigirdar and she has really hit it out of the ballpark with Nishat’s story. It is one of the most satisfying novels I’ve read in a long time and had just the ending I needed it to have. Don’t miss it!
This book is recommended for readers age 14+
This book was borrowed from the Brooklyn Public Library