Summer and July by Paul Mosier

Summer and July by Paul Mosier 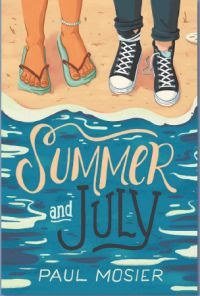 It’s July 1st and Goth girl Julliet, 12, is on a plane with her mother traveling from Michigan to Ocean Park, California, where her mom, a doctor, will be working in an ER. Julliet’s parents are divorced, and her dad is in Switzerland with his new younger girlfriend. Julliet is also a girl who is fraught with fears, all shared with her best friend Fern, whom she is forbidden to hang out with after a misunderstanding.

On her first morning, Julliet finds a note from her mom listing possible goals for her, including exercise, fresh air and work on her fears. Later, she meets Summer, an energetic surfer girl who wants to be friends. At first reluctant, Julliet, whom Summer insists on calling “Betty,” slowly begins to warm up to Summer, and Summer for her part, patiently puts up with Julliet fears, while slowly, and even more patiently helping her deal with them.
At first, they simply walk around town, checking out stores and just hanging out. Summer, who lives year round in Ocean Park knows everyone. Like Julliet, she’s mostly on her own because her parents both work. Eventually, Summer gets Julliet to go to the beach and into the water, introducing her to surfing culture. Always at her side when Julliet confronts a fear, the two begin with skateboarding at the beach, then graduate to boogie boarding, all the while continuing to pal around, visiting to Santa Monica pier, and just having fun. But once in a while, Summer isn’t available and Julliet wonders why. It seems Summer has a secret and isn’t ready to share it with Julliet, at least not until Julliet is ready to finally try surfing.
I don’t think I’ve read a good surfing book since I found my sister’s old copy of Gidget in the late 70s. So surfing culture isn’t exactly something I’m up on. But I am a girl who spent summers on the Jersey shore, and I do love the ocean, and enjoyed reading a book that is set in an ocean community. In fact, the setting in Summer and July is so realistic, I could practically feel the sand and smell the salty ocean breeze.
I loved reading Julliet’s transformation as she became more of a Betty, as her “fears” dropped away and she seemed to feel a much less antagonistic towards her mother. Her summer with Summer gives her a confidence that she lacked before arriving in Ocean Park, even allowing her to explore her sexuality. To his credit, Mosier never lets the reader think that Julliet’s fears and her Goth look are anything more than an affectation she’s picked up from Fern and defense mechanism which suits her anger at her parents for divorcing and the way they dealt with the aftermath of that divorce. Right from the start, it’s clear there is someone else under the heavy black eye make up and clothing.
Summer, on the other hand, is such charming, natural, and kind character without any of the shallowness you might associate with pretty blond surfer girls. Summer has an inner strength that enables her to face everyday with a smile and a positive attitude, despite what has happened in her family. And it’s this inner strength that she uncovers in Julliet. I also think that by always calling her Betty, she gives Julliet the freedom she needs to find herself away from her everyday life.
Summer and July is an textured, multilayered coming of age story that turned out to be one of the most satisfying books I’ve read this summer.
This book is recommended for readers age 10+
This book was an EARC gratefully received from Edelweiss+