Review: The Places We Sleep by Caroline Brooks Dubois

Review: The Places We Sleep by Caroline Brooks Dubois 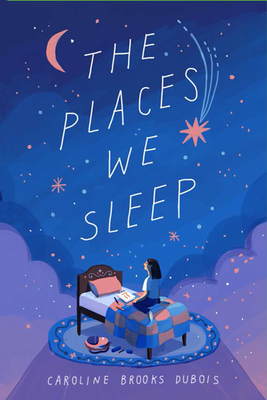 A stunning debut novel in verse about a family divided, a country going to war, and a girl desperate to feel at home.
It’s early September 2001, and twelve-year-old Abbey is the new kid at school. Again.
I worry about people speaking to me / and worry just the same / when they don’t.
Tennessee is her family’s latest stop in a series of moves based on her dad’s work in the Army, but this one might be different. Her school is far from Base, and for the first time, Abbey has found a real friend: loyal, courageous, athletic Camille.
And then it’s September 11, 2001. The country is under attack, and Abbey’s first period arrives.
Like a punch to the gut / like a shove in the girls’ room / like a name I won’t repeat.
Abbey’s family falters in the aftermath of the attacks. With her mother grieving, and her father preparing for active duty, Abbey must cope with the tragedy – and her body’s betrayal – on her own.
Written in gorgeous narrative verse, Abbey’s coming-of-age story portrays the military family experience during a tumultuous period in American history. Perfect for fans of sensitive, tender-hearted books like The Thing About Jellyfish.

Abbey is an Army kid, needs to find new friends as she starts a new school but is facing more than just that. Not only has 9/11 hit her family hard, but she’s facing her own changes, bullying, and first romance.

This book is written in prose and is well done. The author flows through the thoughts, situations, events, emotions, and heart-ache with beautiful finesse. It hits the gut and allows Abbey’s feelings to come across in ways that usual story-telling simply can’t achieve. And this is a deep book, which hits upon many difficult themes.

Abbey does find a wonderful friend with this new school, but with the new friendship, there’s also bullying. I did find this area stumbling on cliche as Abbey and her friend bonk heads with a trio of popular, mean girls. That they bullied Abbey’s best friend for being overly athletic and not interested in boys was a new take, handled pretty harsh, but will resonate with some readers. The friendship  was inspiring and did pull out the heart-strings until the last page.

While this book is beautifully written and runs deep, it’s going to target a very specific type of reader. The prose weighs a little heavy, mostly since the other characters really don’t receive the depth they’d need to keep up with Abby. Also, the plot end suffers a little, since this one is more an exploration of Abby’s innermost workings as she tries to steer through the complexities of the changes in her life as well as the troubles facing her family thanks to the loss of a loved one. It’s a book for upper middle graders, who love to dive into feelings, and that for three-hundred pages, which even for me, meant a few breaks to get through. It wouldn’t have been something I would have picked up at that age, but there were one or two girls I knew who would have.

I do enjoy the style and respect how this book takes this type of prose to a younger audience. There will be readers who truly enjoy diving into it and exploring their own feelings at the same time, and those will enjoy accompanying Abbey as she steers through life.