The Good for Nothings by Daniel Banas!

Home ⁄ Recommended Reads ⁄ The Good for Nothings by Daniel Banas!

The Good for Nothings by Daniel Banas! 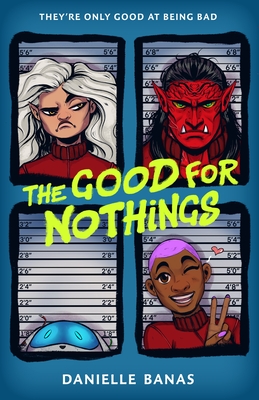 They’re only good at being bad.
Cora Saros is just trying her best to join the family business of theft and intergalactic smuggling. Unfortunately, she’s a total disaster.
After landing herself in prison following an attempted heist gone very wrong, she strikes a bargain with the prison warden: He’ll expunge her record if she brings back a long-lost treasure rumored to grant immortality.
Cora is skeptical, but with no other way out of prison (and back in her family’s good graces), she has no choice but to assemble a crew from her collection of misfit cellmates—a disgraced warrior from an alien planet; a cocky pirate who claims to have the largest ship in the galaxy; and a glitch-prone robot with a penchant for baking—and take off after the fabled prize.
But the ragtag group soon discovers that not only is the too-good-to-be-true treasure very real, but they’re also not the only crew on the hunt for it. And it’s definitely a prize worth killing for.
Whip-smart and utterly charming, this irreverent sci-fi adventure is perfect for fans of Guardians of the Galaxy, The Lunar Chronicles, and Firefly.

Reminding a bit of Guardians of the Galaxy, these pages are packed with action, humor and more than a little heart.

Cora is the daughter of the most renowned crime family in the universe, but her life isn’t what anyone probably suspects, especially since she can’t seem to live up to her mother’s expectations. When the latest heist…um, job…ends up in disaster thanks to Cora’s supposed mistakes, she decides to prove herself once and for all. Which lands her in prison. Her two cell-roomies are more than irritating, but when one comes up with a plan to escape, Cora’s in. Of course, it doesn’t go as planned. Instead, the prison director breaks a deal—steal a treasure (which borders on myth), and they can go free. Not only do they have to find said treasure, but it’s a deadly quest. Add the director’s own lies and schemes, and Cora knows she’s in over her head. But that doesn’t mean she has any other choice.

When I saw the cover, I’ll admit that I wasn’t sure this read was going to be as fun as I’d hoped, but I was pleasantly proved wrong. This story is simply a fun, entertaining read with explosions, near escapes, odd aliens, evil plots, twisted characters, snarky humor, true friendship, lots of food, and tons of heart. Oh, and some quirky romance, too. The pages fly by with ease and created more than one or two smiles along the way.

Cora is a great character to pull this type of story together. She’s snarky, she’s tough…and yet, she’s neither of these. The first chapter already made her more than likable as she tries to live up to her name, almost makes it, and desperately fails. But there’s so much fire in her, and she’s a piece of gold in her own way. I loved her friendship with her robot, but then, that robot was impossible not to like. The idea of friendship and trust and family are what centers this tale. Not that everyone can be trusted. There are characters to love, characters to hate, and those that are very hard to see what their true intentions might be. As to the romance…well, that one fits the rest of the story nicely.

In other words, anyone who loves a bit of hair-brained fun with heart and spacey adventure will want to pick this one up.