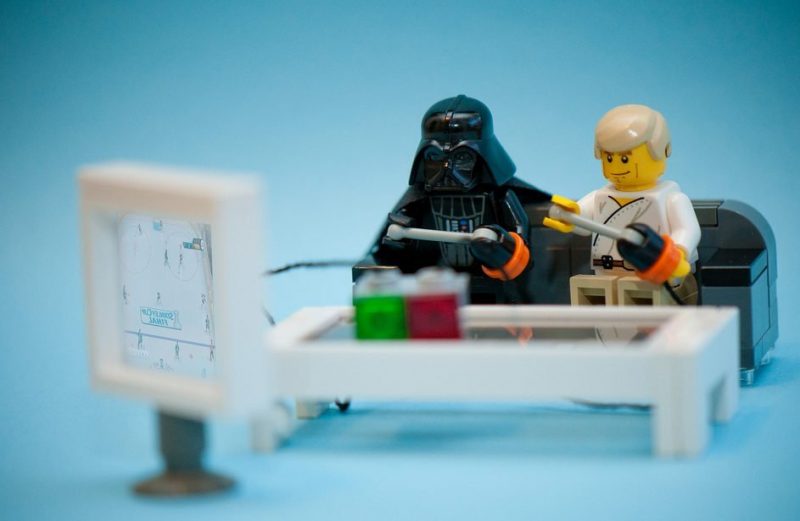 Lego is famous for its colorful construction sets. But in recent years, it has also been busy building a Lego video games empire—and the results are spectacular.

Set in the worlds of family favorite books, comics, and movies, these witty games cleverly combine storylines, action, and challenging puzzles. Players must choose the right characters and use their special skills to play their way through one tricky challenge after another. Critical thinking and cooperation are needed—and it’s so much fun, you won’t even realize you’re learning!

If you’re looking for the best Lego video games, you’ve come to the right place! Check out our handy guide below!

What do you get if you cross the greatest blockbuster of all time and the greatest block-builder of all time? Lego Star Wars – The Force Awakens Deluxe Edition lets you relive all the epic action from the record-breaking space saga. Play your way through the adventures of Rey, Finn, BB-8, and friends – hilariously retold as only Lego can. The Deluxe Edition also comes with a Season Pass, with extra original storylines and hundreds of characters to choose from. Take down the Empire or crush the Resistance – whatever path you choose, may the Force be with you! Bring your gaming to a brand new dimension with the Lego Dimensions Starter Pack! This incredible set combines the worlds of Lego, DC Comics, and Lord of the Rings. Simply place your real-world Gandalf, Batman, or Wyldestyle figurines onto the included Toy Pad to see them appear on-screen. Then add the Batmobile and let any of the characters take the wheel. You can even take the Batmobile apart and drop different builds into the game world. The Starter Pack is filled to the brim with adventures, puzzles, and tasks. But the fun never stops thanks to expansion packs like Ghostbusters, Scooby-Doo, The Simpsons, and Back to the Future. Way to go, Lego!

You don’t have to travel to Platform 9 ¾ at London’s King’s Cross Station to get to Hogwarts! The Lego Harry Potter Collection lets you put on your Sorting Hat and take Harry and pals through Years 1-7 at the famous School of Witchcraft and Wizardry. Unlock all of your favorite characters, solve puzzles, cast spells, tame wild beasts, and battle He-Who-Must-Not-Be-Named in this epic adventure. Digitally remastered for even better graphics and smoother gameplay and featuring 2 DLC packs, this magical collection is sure to drive Potter fans potty with excitement! So, what are you waiting for? Grab your wand and play today!

A new enemy has unearthed a powerful ancient weapon—and only you can save the mystical land of Ninjago! In Lego Ninjago—Shadow of Ronin, the evil Ronin has stolen the Ninja Masters of Spinjitsu’s memories and embarked on a sinister plan. Spin and slice your way through a huge world with countless hours of action-packed gameplay, riding mechs, jets, and dragons along the way. Wander freely through the lands you know and love, like Chen’s Island and the Toxic Bog. Fight to regain your memories and stop Ronin before he can complete his wicked plot. If you are to be victorious, you must seek out the shadows, and step into the dark and unknown. Ninjago needs you! Bring the heroes home with Lego Marvel Superheroes! Swing, smash and surf your way through an awesome original story set in the Marvel universe. Get your claws out in the X-Mansion; take to the skies from Stark Tower; web your way around New York City with your Spidey senses tingling. With super-battles featuring over 100 of Marvel’s finest and vilest, this hugely popular action puzzler is an ideal gift for fans of Lego, comics or movies. As Hulk says, it’s a smash hit!

6. Lego Lord of the Rings

If you’re a true Tolkien fan, you shall not (let this opportunity) pass! Lego Lord of the Rings is quite simply a must-have game for lovers of elves and dwarves alike. With hours of awesome storylines, tons of epic battles and over 60 characters to choose from, this phenomenal fantasy adds Lego’s famous comedic twist to the timeless trilogy. Explore the open world of Middle Earth, fighting goblins, orcs, and black riders along the way. Do you have what it takes to carry the one true ring all the way to Mount Doom in Mordor—and destroy it before it destroys you? The park is open… Do you dare to enter? Experience all the dino action from the four Jurassic Park movies with Lego Jurassic World. Guide your Lego characters through each storyline, from the heart-stopping footsteps of Jurassic Park’s curious T-Rex to the bloodcurdling screeches of Jurassic World’s genetically modified Indominus Rex. As in other Lego video games, you can also explore the parks in an open world adventure. Roam around as any of 20 dinosaurs—or splice DNA to create your own Legosaurs! It’s fearsome fun! Get ready for an Avenger adventure with Lego Marvel Avengers! Don your costumes and take control of Iron Man, Hulk, Thor, and 100 more Marvel characters as you battle the evil forces of Ultron, Loki, and co. Enjoy Lego’s hilarious take on tons of scenes from the Avenger movies—as well as iconic storylines from Captain America: Winter Soldier, Iron Man 3, and much more. There’s also an enormous open world option, where you can venture through eight famous Marvel settings, collecting golden bricks and unlocking characters as you go. So, suit up guys—the world is relying on you! No list would be complete without the eagerly-anticipated Lego Worlds. Explore a thousand worlds and make them your own. Build them up brick by brick or use the multi-tool or prefabricated Lego structure options for speedier construction. Add characters, customize their appearances, and make them come to life. Ride through your universe on horses, cars, and dragons—and smash it to pieces with dynamite, rockets, or flames. The only limit is your imagination!